Your body is a world in and of itself, home to a countless number of microscopic organisms. This symbiotic relationship is essential, but not all residents are harmless. Something has slipped in unnoticed. Something is gobbling up every good thing you put in your body and converting it into toxins and ammonia. I’m talking about…

You may be thinking there’s no way you have parasites. Isn’t that something we don’t have to worry about here in the U.S.? Wrong. It is estimated that 1 in 3 Americans have parasites. By the way, that sushi you ate for dinner was riddled with parasite eggs.

You can’t know for sure unless you do a parasite cleanse and see them for yourself, like I did. But luckily there is an easier way: Diatomaceous earth. Die-ya-toe-may-shus earth. This powder is made from the fossilized remains of diatoms. Okay. What are diatoms?
These: 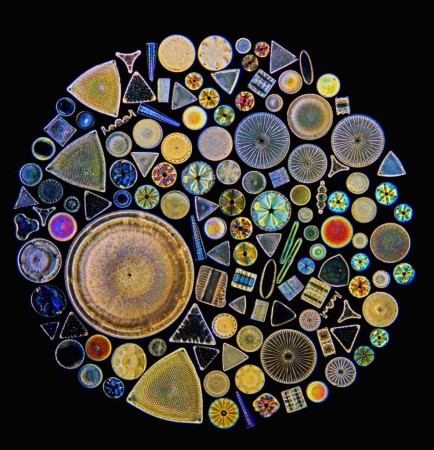 They’re the good guys. Beautiful unicellular algae made up of 80-90% silica. They live in moist environments like lakes, oceans, even the undersides of plants. It’s like looking through a kaleidoscope – a far cry different from parasites under the scope.

How Does This Fossil Flour Work to Clean out Your Colon and Rid Your Body of Parasites?

Diatom shells are very hard, hollow chambers full of holes similar to honeycombs. You can think of them as little traps. They have a strong negative charge and attract things with a positive charge, like parasites, as well as fungi, mold, mucus, etc. Since diatomaceous earth has a negative charge, it won’t harm good bacteria, which also have a negative charge.

As the microscopic diatom shells are passing through your colon trapping the bad guys, they’re also scrubbing the walls of your colon clean of the other monster- mucoid plaque. Over time, undigested food and other crap collect along the walls of your colon and turn into something akin to rubbery cement. Parasites feed on this and lay their eggs in it. This stuff also prevents the full absorption of nutrients. The diatomaceous earth removes it layer by layer, day by day. In a few months’ time, your colon will be clean.

Are There Other Benefits?

You wouldn’t expect a single-celled organism to be so hardy, would you? Here’s why: their cell walls are made of silica, which makes for a good defense against disease, viruses, etc. In fact, it has been postulated that disease cannot exist in the presence of silica. (Another good reason to get enough of it!) As you may know, silica is also great for your hair, skin, nails, teeth… But so much more…

This must be some pretty expensive dirt if it can do all that. Nope! I get mine for $2.50 a pound at my local health food store. It lasts a long time, too, since you only take 1-3 tablespoons of it a day. Which brings me to…

How Do I Take it?

There is really no “right” way to take diatomaceous earth, just don’t take it with other supplements. You can add it to anything from water to smoothies. Personally, I add mine to a small glass of water, stir, and chug–followed by more water. (It doesn’t taste bad, it’s just important to hydrate.) You can take it at any time of day. I’ve experimented with taking it first thing in the morning, split up over the day, and before bed. Before bed has become my favorite time to take it. I keep a coffee scoop in my bag of dirt, which is equivalent to two tablespoons.

It’s also a good idea to work your way up; start small. I started with one teaspoon a day and added a teaspoon every week until I reached 2 tablespoons. Since diatomaceous earth has a cleansing action, it is possible to experience some detox symptoms if you dive in too quickly.

Did you know you can feed this stuff to your pets, too? I have a cat, and she gets a teaspoon mixed into her wet food. I thought her fur was soft before, but the silica in the diatomaceous earth made her coat luxuriously soft. She is a very picky (snobby) cat when it comes to food, but she has no trouble scarfing down her earth-laced meal.

If you’re going to deworm yourself, you’ll want to deworm your pets since they will infect you over and over again if you don’t. Behind every sloppy kiss and furry cuddle, these invaders lie in wait.

Why Do I Think Diatomaceous Earth is the Best Way to Rid the Body of Parasites?

When I discovered diatomaceous earth, I was coming off of an intense colon cleanse gone parasite cleanse. Salt water flushes, enemas, psyllium husk shakes, and lots of raw garlic. I stayed on curezone… And then laid awake at night wishing I hadn’t. I was making a lot of headway, and at first I felt better than I had in ages. But I didn’t take it slow. It was war. Once I knew they were there, I wanted those suckers gone by any means necessary. I ended up throwing myself into a healing crisis. I was getting results, but at a price. You see, parasites are wretched creatures, and as a last Hurrah, give off toxins as they die and leave countless eggs in their wake. And it makes you feel extremely fatigued and crappy.

I had enough, but I wasn’t going to give up. I read about diatomaceous earth, and after talking to the owner of my local health food shop, decided to stop the rigorous cleansing I was doing and start on the earth. In contrast, its action is slow and steady.

I could feel how it was working inside my body immediately:

Will I See Worms in my Poop?

That depends… If you’re curious enough to check, then you will probably see segments of worms at some point. They are translucent in appearance, and pretty easily distinguished from undigested food. I know it’s not a pleasant thought, but… 1.) They are already dead and 2.) Better out than in.

You might also expel mucus as a result of taking diatomaceous earth. This is a great sign. It means your colon is being cleaned of all the junk that prevented it from functioning at its best.

Is There Another Way to Look at This?

I believe there is. Let me explain.

Parasites are a condition of the Fall. They emit chemicals that influence the way we feel, think, and act. I believe this is an aspect of the struggle against the flesh. Some of the common symptoms of parasites are extreme fatigue, depression, and anxiety, along with a host of other more physical symptoms- even food cravings. Parasites feed on sugar and junk food. Their cravings become your cravings so they can survive. If you let them take over, your body is not truly your own. And where there are worms, there is disease. You may have heard the expression “death begins in the colon.”

Parasites are everywhere. It is almost impossible not to come in contact with them. It is all too easy to become obsessed with the task of getting rid of every single one of them. This is foolish, because it’s just not possible. The goal should be to create an environment that is inhospitable to parasites, where good bacteria like probiotics thrive. If the good outnumber the bad, that’s a win in my book.

I believe you can and should do something about it. It doesn’t have to be extreme, like what I put myself through. Taking diatomaceous earth is something anyone can do. Of course you’ll have to use your own discretion, but in summary- diatomaceous earth is natural, it’s dirt cheap (pun intended), it’s gentle, and it’s peace of mind. I wouldn’t be without my dirt. 🙂

To make it easier for those whose interest I’ve piqued, I will mail out up to five free 1lb bags of food grade diatomaceous earth. All you have to do is leave a comment below (before comments close). I’ll get in touch with you via email for your shipping info. First come, first served.

The free bag offer has closed, but you might still receive a bag of DE (when recommended) if you partake in a free session in our Tp Healing Sanctuary. We might also have a few bags in our freeshop.

*This post is about the internal use of food grade diatomaceous earth.

Lauren is a Christ follower, wife, mother, and community herbalist. Her happy place is in the forest and she enjoys fantasy novels, handwork, fermenting, and all things ancient. She hopes to inspire others by sharing her insight about what she has learned along the way.