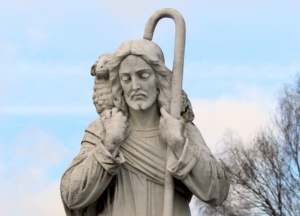 The next lesson I learned involved my milk kefir grains. No one knows the origin of these mysterious grains, except that they were called “gift from God.” In his book The Art of Fermentation, Sandor Katz writes,

Biologist Lynn Margulis asserts: “Kefir can no more be made by the ‘right mix’ of chemicals or microbes than can oak trees or elephants.”
….She points out that kefir grains do not possess “programmed death,” as animals, plants, and certain other organisms do, and therefore may theoretically live forever, given adequate nutrition and tolerable environmental conditions.

It stands to reason that something labeled “gift from God” would be a symbol of eternity. Some even theorize these grains could have been the manna God gave to Moses and the Israelites during their time in the wilderness…

Whatever the case, they have a rich and mysterious history and eventually settled in the Caucasus Mountains where they were guarded and kept secret. (The Caucasian people said Mohammed gave them this gift, but no one knows where he got them.) The shepherds of this land used them to ferment milk in animal skin pouches as they traveled with their herd. This preserved the milk, quenched their thirst, and kept the shepherds in good health.

These highly regarded grains were shared amongst Caucasian families as a gift of “health and wealth,” passed down from one generation to the next. The grains actually grow and multiply over time, which means the meager-looking spoonful someone gave you will soon have grown into more than you know what to do with! They are meant to be shared; it is their nature.

But the Caucasians didn’t want to share. It wasn’t until the early 1900’s that these grains were forced from their ancient hiding place. It is a story of Russian spies, a prince, and kidnapping… the tale of how milk kefir eventually made its way around the world. 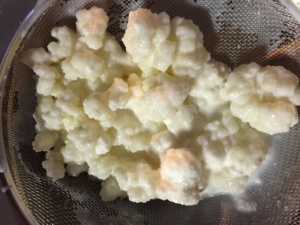 There is another story in which a very sick man embarked on a quest to find a cure for all that ailed him. He searched and searched, but found no cure. Eventually, he ended up at a monestary, his last resort. He noticed the vibrant health of the monks and begged them to share their secret with him. The gracious monks agreed to take him in, and nursed him back to health on a curious fermented milk. When his health was restored, he asked if he could take some of the curious milk-fermenting grains with him. The monks agreed on one condition: as his grains reproduced, he must never sell them for a profit. Instead, he must seek out someone else to help and give that person a portion of his grains.

And interestingly, if you try to continue fermenting with more than you need, the grains will begin shrinking instead of growing! I witnessed this myself. My grains grew until I had more than I needed, but I didn’t prioritize finding someone to bless from my bounty. I selfishly continued fermenting my usual half gallon of milk with my huge batch of grains. I guess they had no room to grow and, to my surprise and disappointment, I noticed they had shrunk considerably between batches. I realized in a tangible way that greed is not rewarded. In that moment, I felt like the Holy Spirit was teaching me why it is important to have a giving heart instead of a selfish heart. When we bless others, God blesses us.

So, in the end… Making milk kefir in my kitchen connects me to a history at least 1,000 years old, and a mysterious, supernatural origin. And each time my grains become plentiful, I have an opportunity to develop a giving heart and bless someone else.

I hope you’re enjoying these insights I’ve gained through my ritual of fermentation. The next one is a little less mysterious, but you won’t have to procure any grains to get started. 😉 Until then…

Lauren is a Christ follower, wife, mother, and community herbalist. Her happy place is in the forest and she enjoys fantasy novels, handwork, fermenting, and all things ancient. She hopes to inspire others by sharing her insight about what she has learned along the way.